Knud Lavard Church in Lyngby opened on August 15, 1957 and appears in a modernist style characterised by its functional architecture. Among the Catholic Church’s vast array of saints, the saint chosen for the present church is not modern. Instead it was given the name of the saint, who had given the church name, when the parish was created in 1936: Canute Lavard (Da: Knud Lavard), a royal prince in the medieval times in Denmark. But who was he?
Canute Lavard (1095/96 to 1131) was the son of “Erik Ejegod”. He was named after his uncle, Canute the Holy (Da: Knud den Hellige). Erik Ejegod and his queen Bodil died in 1103, on a pilgrimage to the Holy Land; he was in Cyprus, and she was on the Mount of Olives. The successor as king of Denmark, was Niels, another brother of Canute the Holy and therefore also uncle of Canute Lavard. The eight-year old Canute Lavard was then brought up at Zealand by a nobleman, Skjalm Hvide, and for some years Canute Lavard served the Saxon Duke, Lothar, who since became an emperor. Canute Lavard was married to Ingeborg (daughter of Mstislaw of Nowgorod) in approximately 1116, and they had several daughters and a son called Valdemar (the Great).
As a prince Canute Lavard was destined for a political career. It began around 1115, where he became a royal prefect (Earl) in the commercial city of Schleswig. This was primarily a job about the defence of the southern border, where the Danish kingdom was adjacent both to the German Empire and to several Slavic tribes such as the Abodrites. Canute successfully defended the southern border and the rich commercial city of Schleswig against attacks from vendors, pirates and robbers of the main roads. He created peace, security and order.
His nickname “Lavard” is an honorary title corresponding to the English word “Lord”. Canute was also honorary senior at the feast of the Schleswig-merchants, he built castles at lakefront of Slien and he promoted the Christian mission among the Slavs (e.g. supported the Bishop Vicelin who founded the Neumunster in 1127).
In the liturgy his is remembered for his commitment to legal fairness and justice for all, regardless of social status: “He scattered the enemies, killed the robbers and hanged the thieves. In short, he delivered his homeland from all oppression.” For instance, it is said that a nobleman was abusing his power to mistreat the poor and suppress others around him. When Canute heard this while he was away in Skåne, he came right back, got hold of the nobleman, accused him, interrogated him and sentenced him to be hanged. The accused pleaded not guilty and thought he should be acquitted because he was related to Canute Lavard: “But I am one of your close family members, do not harm a member of your family!” Canute’s response was that since the man was of his family, he would certainly also get special treatment with respect to his sentence, and the more he stood over others in the family, the more he should be exalted. Therefore, Canute had raised the mast of a ship at the place of execution, and he let the man be hanged from there. To us, this story may seem cruel and vindictive, but it should be emphasized that Canute Lavard practiced the principle of justice and equality before the law for all, in the only way people would understand at the time.
In the years after 1127, Canute Lavard achieved great success. The Abodrite Duke Henrik, who was Canute’s cousin, died, and Canute asserted himself in the ensuing power struggle. With the support of his old friend, the Saxon Duke Lothar, who had become a German emperor, Canute was recognized as the king of the Abodrites in 1129. On this occasion, Canute swore his allegiance to the German emperor. The situation alarmed King Niels and especially his son, Magnus. At that time, the succession to the throne was not decided, and all male members of the royal family, true-born as well as sons of mistresses, could be considered for the royal throne. The success of Canute was a threat to Magnus’ chances of taking the throne. It gave good political sense to kill Canute. 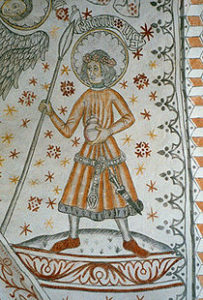 At Christmas in the year 1130, Canute was invited to a Christmas party at King Niels’ residence. Canute’s wife sensed something strange and asked Canute to decline the invitation, but Canute arrived on the grounds that if he stayed away, he would shame the mutual trust, the “ties of blood” and the federal agreement. He did not decline the invitation because he was unaware of the risk, but because the values he praised (trust, community, fellowship), warranted that he took the risk. The Christmas feast went peacefully, but on the way home, he met with King Niels’ son, Magnus, in Haraldsted forest near Ringsted, as Magnus wanted a confidential talk with him. It was an ambush, and Canute Lavard was killed on January 7th 1131. Seven days later, his wife Ingeborg, gave birth to a son; Valdemar (the Great).
The manslaughter resulted in a political backlash, because rather than clearing a rival out of the way, it sparked a civil war. Canute’s half-brother Erik (Emune) rebelled, and several years of fighting back and forth culminated at the battle at Fodevig in Skåne at Pentecost in 1134, where prince Magnus died along with another prince, five bishops, 60 priests and many other great men and laymen. Shortly after, King Niels was murdered in Schleswig. However, this did not win peace and stability, and over the next twenty years there were repeated clashes between the various branches of the royal family (Svend, Canute and Valdemar) until the son of Canute Lavard, Valdemar the Great, won and retained the overall power in the year 1157.
Canute Lavard was not just a victim of a failed political intrigue. There were people who thought he was a saint. His body was brought to Ringsted, a water spring appeared on the spot where he was murdered, and healings occurred. As early as 1135, King Erik Emune began the work for the recognition of his brother, Canute Lavard, worthiness as a saint, when he founded a monastery of the Church in Ringsted, but only after Valdemar the Great became the ruling king, the efforts accelerated. In 1169, Pope Alexander III approved Canute Lavard as worthy of sainthood, and on June 25th 1170, at a big church celebration in the newly built church in Ringsted, the remains of Canute Lavard was buried, and his grandson, Canute (VI) was crowned co-king and his father’s successor. Therefore, the death of Canute Lavard did not only trigger a civil war, but in the long term also the beginning of the strengthening and stabilization of the Danish royal power during the reign of the Valdemars (the heyday, where Valdemar the Great and Bishop Absalon stood shoulder to shoulder against the Venders).
Canute Lavard became a patron saint of the many St. Canute’s guilds, which were associations of Danish merchants around the Baltic Sea and in Danish cities. After the Reformation, the pilgrimages ceased, and his remains disappeared. It is known only that Steward Corfitz Ulfeldt in the mid-1600’s brought the skull of Canute Lavard to France and gave it to the French Kings’ burial Church, St. Denis in Paris. From here, it disappeared during the French Revolution.